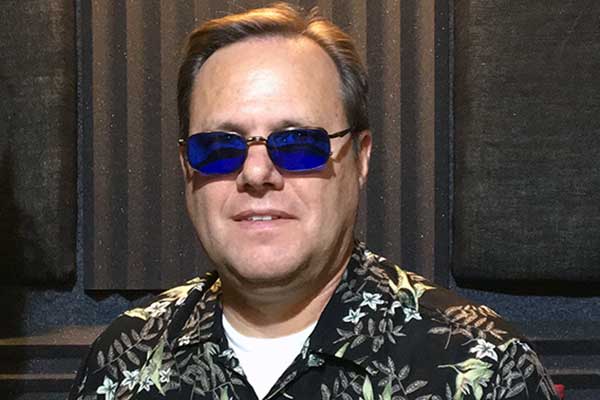 In early 2017, I started noticing that light was a trigger for the seizures I’d been experiencing for about two years. I had been on an anti-seizure medication called Keppra for a couple of months by this time. The medication was working but didn’t completely control my episodes.

I first became aware that the seizures might be triggered visually when my wife and I were changing sheets on our bed. She threw the bottom sheet out over the bed and watching the up and down motion of the maroon colored sheet triggered a seizure. As a side note, I should mention that they have ruled out epilepsy as the cause of these seizures so I’m not supposed to refer to them as seizures anymore because that term is exclusively reserved for actual epileptic episodes. Neurologists refer to non-epileptic seizures as events or episodes and it makes them grumpy when I call them seizures.

The next week I was at a follow up appointment with the neuro nurse practitioner and he decided to test my eyes for some reason. He told me to follow his finger with my eyes without moving my head. I followed his finger side to side with no problem but moving it up and down triggered an event. His only comment was, “That’s interesting.”

One evening, a few days later, my teenage son was flashing his iPhone light at his cat in the living room. The lights were down low. I saw the flashing light out of the corner of my eye and it made me jerk a little bit. I had him come in front of me and flash it in my eyes and it triggered a more severe event.

I started searching the Internet for information about light sensitive seizures and found numerous posts about a 1997 Pokemon cartoon that sent more than 700 Japanese kids to the hospital with seizures. Here’s a link to an article about it:

Here’s a clip of the video:

When I watched the video it triggered a pretty violent event. I couldn’t believe just watching something like that could trigger convulsive movements so, like an idiot, I watched it again. This time it affected me so severely that I slammed my head into the monitor.

After researching this phenomenon, I found a term called photosensitive epilepsy. It appears that many people with photosensitivity don’t actually have epilepsy, but strobe lights, flashing lights and even lights in department stores like Walmart cause problems for some people. Before I got on medication I had no idea what triggered my episodes or why I always felt nauseous and dizzy in Walmart or at church.

I eventually found that the Zeiss company in Germany did some research and found that cobalt blue glasses were effective in treating light sensitivity. But the American Neurological society doesn’t seem to recognize or accept this research so I had a difficult time finding the lenses. I was able to find cobalt blue glasses but not for prescription lenses. After a lot of digging I finally found an optician in New Jersey who stocked the lenses. He fitted a magnetic clip-on with blue lenses that fit my glasses.

Here are some articles about the lenses:

Life has been much better with blue lenses. Once I started wearing them I didn’t feel sick and dizzy in Walmart anymore. I watched the infamous Pokemon video with no problems. I can watch movies again without going to the emergency room afterward. The world is a much better – and bluer – place.

The neurologists I’ve been seeing don’t believe the lenses have any effect whatsoever. In fact, since they can’t find the cause of my condition they have suggested that my condition is psychogenic, meaning that my episodes are not caused by a physical problem, but are a manifestation of stress or anxiety. The neuro-psychiatrist I saw (or is it psycho-neurologist) said that I don’t have the common hallmarks of a psychogenic condition, but since they don’t know what else to do, they’re sticking with the psychogenic thing.